In my opening post on this save I said there’d be either an update in January, or at the end of the year. The update comes in January because of some big, unforeseen, changes to the squad.

First, lets look at how the team has done in the first half of my year in charge of the Italian giants.

Plenty of green dots which is nice to see. We went out of the cup in the first round to Serie B opponents. Not sure how or why we lost it, I just thought it was going to be another failure for me on FM16. However, we made an absolutely blistering start in the league, leaving us top. The goals were flying in, the tactic had finally settled, and key players were performing.

And then we met Juventus. A 3-0 loss reflects the fact that I got my tactics wrong. Their narrow 4-3-1-2 flooded the centre of the pitch against my 4-4-1-1 that had provided a 4-0 win at Lazio. We deserved to lose, and it has given me food for thought for our next encounter. Suddenly the goals seemed to dry up, but the results kept on coming as we stayed tight at the back. Diego Lopez and Co. have provided us with a number of clean sheets.

And then we met Roma. Another 3-0 loss in a big game. This time I don’t think it was particularly tactical, they simply took their chances when we didn’t. This started our worst run so far, where we failed to win in 5 matches. The Inter game was especially disappointing as we had led 2-0, and Jovetic scored twice for them after having not scored all season.

Fortunately, excluding Bologna, we have improved since the winter break, and the goals seem to be flying in again (13 in our last 4 matches). This all leaves us second in the league at the end of January. 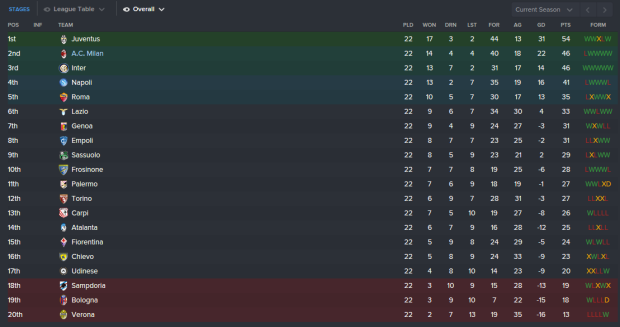 This is where the real stories have come so far, leading me to write this update. We’ve had a lot of changes. 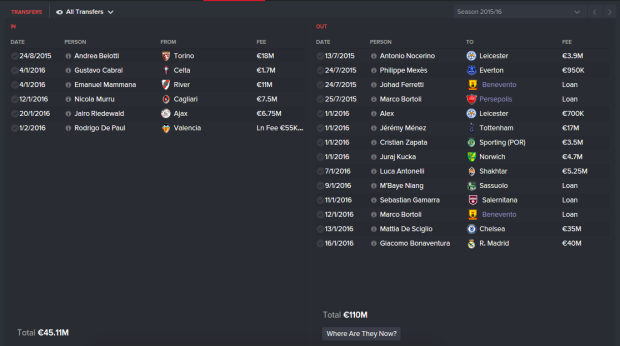 We made a further five signings, but the outward column is where most things happened. I’ll run through the senior players that I’ve let go in since the summer.

I’ll abandon the bullet points for the two huge outgoings. Both signed new contracts at the start of the season to ward off interest. However, excellent performances down my teams left hand side meant that interest in the two players returned in January. I was hoping De Sciglio would be a key part of the team for years to come, but I couldn’t turn down €35 million. Bonaventura performed very well for someone who has no attributes above 16. €40 million was a huge offer as he only joined last year for far, far less. He’s also definitely replaceable.

This gave me plenty of money to spend on improving my new streamlined squad.

Emanuel Mammana – I found this fellow on loan from River at Olympiakos. He looks absolutely excellent for a 19 year old, which gives me probably the best young centre back partnership in football (Romagnoli & Mammana). 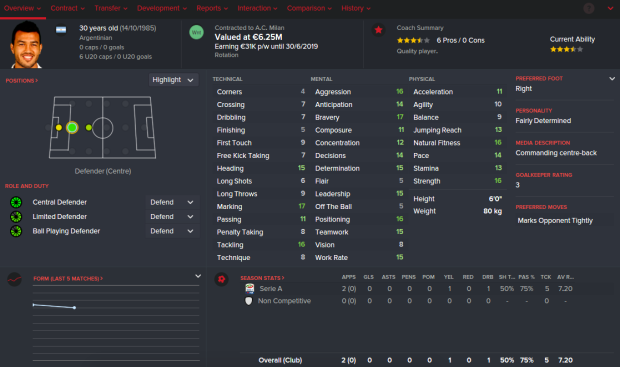 Gustavo Cabral – I rarely sign 30 year olds, but with Alex and Zapata leaving it meant that my three centre backs were going to be 19, 21, and 22. I needed some more experience, and as his Cabral’s contract was running out, I got a very good player on the cheap.

Nicola Murru – My replacement for De Sciglio. They’re rather similar, both Italian and capable of playing both sides of the defence. I’m hoping he can develop into an excellent fullback. €7.5 million will hopefully become an absolute bargain. 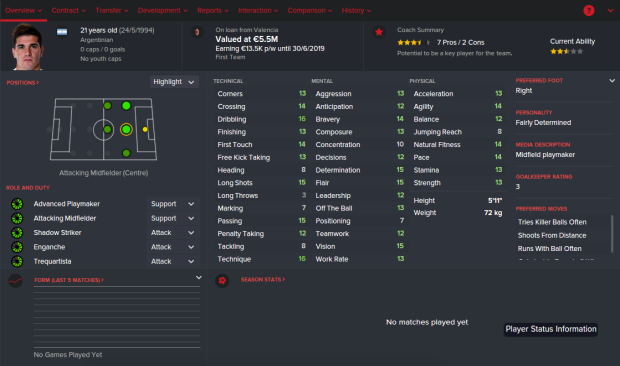 Rodrigo De Paul – I looked around lots for a replacement for Bonaventura. I had a deal in place for Hakim Ziyech, but he then decided to go to Tottenham. I scouted a number of different options, but never really found anyone that I felt secure in investing a large fee in. Instead, I have loaned De Paul from Valencia, with the option of €5 million to make it permanent if he proves to be suitable.

Jairo Riedewald – No screenshot for Jairo, I’m sure most of you know of him. He can play centre back, left back, or in midfield. He’ll mainly be used for cover at left back and in midfield. As a product of the Ajax academy, I’m sure he’ll develop into a fine player.

So there’s been a huge number of changes to the squad. We’ll have to wait and see if this hampers my performance in the second half of the season. I’m hoping it doesn’t as the majority of my starting XI has stayed the same. 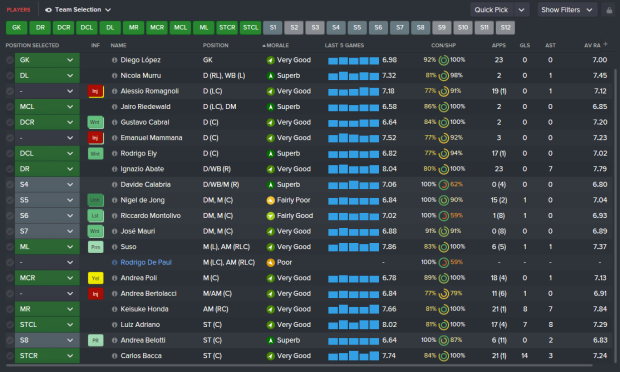 Lopez has been solid in goal, as you’d expect. Suso has initially stepped into the whole Bonaventura left very well, so it could be a struggle for De Paul to break through. Bacca started with 8 goals in 8 games, then went through a 13 hour drought. It seems he is back know though, including a hat trick vs Sassuolo. I’ll highlight a few performances that stand out. 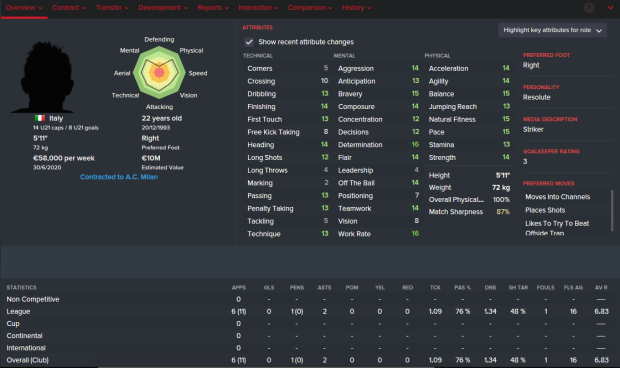 Andrea Belotti – €18 million summer signing is yet to score. To be fair he’s been in and out, used in a variety of roles. He’s contributed just about enough during games to make him not seem a complete flop. I still have hope for him.

Keisuke Honda – Fan favourite, and player of the year so far. He’s contributed key goals and assists on a regular basis. His value keeps on creeping up, and as he creeps closer to 30, I can say a rather large pay day round the corner.

Alessio Romagnoli – For someone of such a young age to lead the defence in the manner he does is very impressive. I’m hoping he stays with me this whole save, and fulfils his description as a wonderkid. He looks well on the way.

Some pretty big changes to the squad, and probably more than I would have liked. Since joining in the summer I’ve let 11 senior players leave the club. This means there’s plenty of money in the bank (€47.81m transfer budget & €214k per week wages), but I don’t think I’ll strengthen till the summer. Over the second part of the season I’m hoping the changes don’t derail our season, and a Champions League place is well on the cards, although Juventus seem to be out of reach.

The end! A pretty long post by my standards, but the craziness of January necessitated it. Thanks for taking the time to read this post, and any feedback would be greatly appreciated.