My first season at AC Milan has come to a close, and overall, it’s been pretty good. At the beginning of the season the board expected us to finish  in the Europa League positions. We had quite a large, old, and overpaid squad. A lot has changed.

The changes mainly began in January, and have there own update here. For more details on the first half of the season check out that update. But lets look at how the team did in the entirety of the first season. 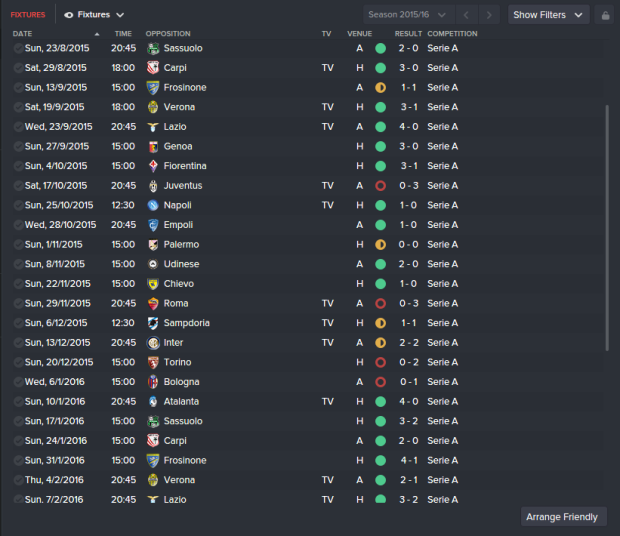 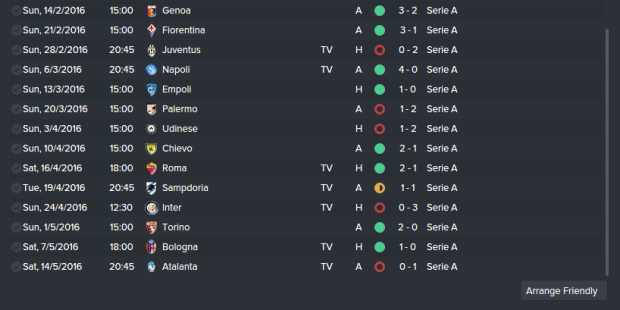 The results on the face of it look pretty good, with plenty of green dots to show for. First we’re going to look at the league table after 26 games, which could have been a critical point in the season. 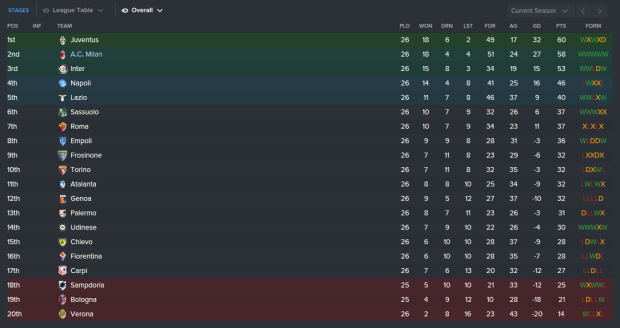 Since January Juventus were dropping lots of points which meant they came to the San Siro with us having the chance of going top with a win. However, we were unable to capitalise.

Another disappointing loss against one of our rivals. As you can see from our results, from the 6 games against Roma, Inter, and Juventus, we only managed 1 win (2-1 at home vs Roma) and 1 draw (2-2 away vs Inter). I think this is what really prevented us from sustaining a title bid. The final league table looked like this.

9 defeats from the season was far too many. Inter’s serious lack of consistency meany we had a solid 8 point cushion between us, and then a further 10 up to Juventus. This was arguably our best chance to beat Juventus to the title because, as shown in real life, they’re in a definite transition period. However, 87 points is still a huge tally for them and it’s going to be hard to overthrow them and prevent a sixth straight Scudetto next season.

Generally we went through patches with poor results when suspensions and injuries hit, meaning I had to rotate the back four. When Romagnoli and Ely started 10 games in a row together, we only conceded 6 goals, including 7 clean sheets.

Using the newly improved stats screens on FM16 this year, I’ve pulled out some interesting screenshots that could provide me with information about our performance this year and how to develop the team going forward.

We scored the second most goals. This is pretty good, but I’m sure there’s room for improvement which could see us overtake Juve.

This is an area that could definitely be improved. We started off the season excellent defensively, but changes at the back made us a bit more brittle. Also when we lost, we tended to concede 2+.

This is an interesting stat. 15th in average possession shows our attacking intent, but also something which perhaps could be improved to control games more. 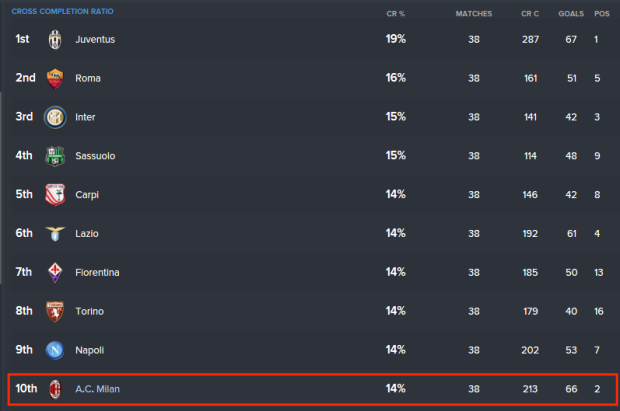 Looking at the goals scored from crosses, we were second highest. However, we’re 10th for cross completion so perhaps improvements could be made to the supply and destination of crosses.

7 red cards was far too many. It completely ruins a game plan and means that for 6 games (we had two sent off in one game) we were at a disadvantage.

This is more about off the pitch matters. 3rd highest for average attendance, but only 49% of the San Siro. This will likely be improved with European football and consistency. Says a lot about the state of Italian football though.

4th highest salary, comfortably behind Inter and miles behind Juve, and coming 2nd is pretty good. Especially seen as I’ve reduced it by at least 200k per week since arriving.

By far the lowest net spend highlights an excellent season considering the huge transition. It also means there’s plenty in the bank.

Above is a slideshow of awards from the club, and won by my players. Below is the stats of my first teams squad.

Diego Lopez was solid in goal, although his attributes have begun to decline at the age of 34. Abbiati, who you can’t see in the screenshot, didn’t play and is retiring at the end of the season.

Nicolas Murru replaced De Sciglio excellently, and was voted as signing of the season by the fans. Romagnoli and Ely proved a solid partnership, and Cabral and Mammana had decent showings in the second half of the season, although Cabral was unhappy with his game time. Abate was one of the highest rated players in the league, and when he picked up an injury, 19 year old Davide Calabria stepped up excellently.

In the centre of midfield there was quite a lot of chopping and changing. De Jong started the season well, but I got frustrated with his discipline, and he ended up hardly playing in the last third of the season. Poli and Bertolacci was the general pairing and were pretty solid in general, although I think I’ll need to improve this area to take the team up a level. On the right of midfield was Honda, who was my player of the year. On the left Suso, who moaned about Bonaventura being sold even though it gave him far more game time. Suso was so good that De Paul didn’t get much of a chance, but when he did he looked an exciting player.

The normal pairing was Luiz Adriano and Carlos Bacca. Bacca ended as top scorer, although his goal came in patches. It seems Bacca needs constant individual team talks to get his best. Adriano was similar in terms of the patchiness of his goals, but his high work rate (19) meant he always contributed. The biggest disappointment of the first season was Andrea Belotti. I signed him for €18 million and he only scored one goal (30 yarder though). Admittedly he was chopped about, but I was still expecting more.

The players currently on the way out of the club are:

I may also look at selling Diego Lopez because he has begun to diminish attribute-wise, although he is my captain. Cabral may also leave because he won’t get enough game time to keep him happy, which would leave me with no centre backs over 22. Apart from those 2 I don’t have any other planned sales yet. However, I’d say only Romagnoli is unsellable at the moment, and anyone over 28 definitely has their price in my eyes. We’ll have to wait and see.

In terms of transfers to the club, I already have some in place:

I’m thinking of making De Paul’s loan permanent because of his versatility. I may also look at the possibility of a really high quality centre midfielder, although I’m not a big fan of huge purchases. If a high quality striker under the age of 25 became available I’d also consider it.

My overall transfer policy will be to make the squad smaller, with more players who can play multiple positions, such as Gabriel Barbosa. This will allow me to keep a settled back 4, with plenty of options in front, and no players unhappy (in theory). Last year we used the joint 4th highest number of players (28) and I’d like to lower this. In the first season I’ve left scouting to my Chief Scout, but I’ll be taking it over from this summer.

It’ll be tough to overthrow Juventus, so my main target for next year will be to improve on the 77 points I made this year. I’d also like to improve on this years cup run, where we were knocked out in the first round. And in my first year in Europe, I think we should be getting out of any Champions League Group, although we’ll be very inexperienced.

Congratulations if you have made it to the end of this post, I can’t tell if it’s very long, or it’s just the screenshots padding it out. Anyway, thanks for reading, feedback would be greatly appreciated, and I hope you return for the next update!